Holy wow. It was an exhausting week filled to the brim with great new plays.

Standouts include Dolphinephilia, a trippy farce based on the true story of Margaret Howe Lovatt. It was presented by the mysterious Marine Mammal Communication Project. Also in the realm of the absurd was Aliens vs. Beckett, a spin on the classic Waiting For Godot, and presented by the always slimy Crowbait Club. And The Green Room, a hilarious one-man show featuring a man arguing with his sock puppet.

And those were only from the shows that I saw. The festival featured dozens of acts, and after soldiering through this week, I commend all who gave the effort for their art.

Megan, as per her usual mode, outdid herself. She acted in three plays, and wrote/directed one as well.  I really enjoyed the perky conversations of Take the Long Way home, and the excellent set designed by Carl Currie.  And Megan’s performance in the poetic Boy Come Home was perhaps the best of her career.

I also acted in my first PortFringe show. I shared the stage with my wife, as well as the talented Adam Ferguson and Kristina Balboa in Allie Munier’s comedy I Can’t Take You Anywhere. It was an honor to act in such a well-written and humorous play. I hope Allie submits it to more festivals.

I shaved my beard for my art. Most people liked it, while others, myself included, found it strange to see my bald face. One person said that I looked like a creepy pedophile, and that hurt a bit. I’ve never quite understood that comment. How does one look like a pedophile? Perhaps it says more of the describer than it does of the described.

I’m glad the week is over and that we can get a break. Enjoy some photos.

The slimy facehugger from “Aliens vs Beckett”

Cleaning up after “Boy Come Home”

The cast of “Take the Long Way Home”

Here are two flyers, hot off the presses for PortFringe 2015. Both were lovingly crafted by Allie Munier. Yours truly will be starring in I Can’t Take You Anywhere, alongside my wife. We will be playing a quarreling married couple. If you like these flyers, then you should obviously come see the plays. ( I’m writing this post from a campground by the way ).

For the past seven years I’ve supported my wife, Megan, in her whole-hearted devotion to the difficult art of play making. This past year, I’ve been joining her onstage and backstage occasionally. I’m thinking about changing my title from Rocco Tripaldi, Theatre Husband to the slightly elevated Rocco Tripaldi, Frequent Collaborator.

END_OF_DOCUMENT_TOKEN_TO_BE_REPLACED 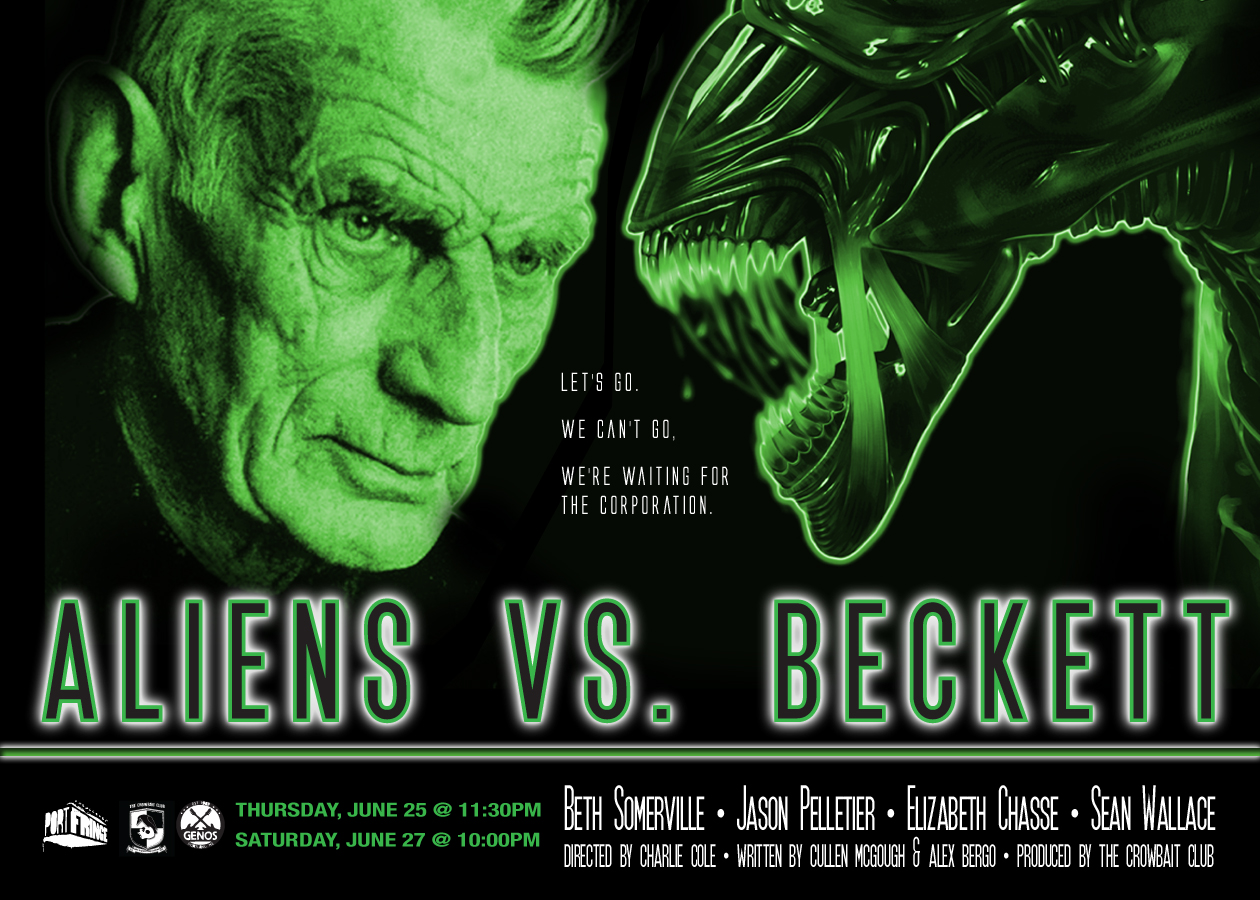 The countdown is on for this year’s PortFringe festival, and the hashtags are just starting to warm up. Get excited people, and make sure you come support the amazing talent in this town.

To wet your whistle here are a few enticing bits from the web!

END_OF_DOCUMENT_TOKEN_TO_BE_REPLACED

Holy smokes, 2014 was the biggest year of my life thus far! When I try to convey the magnitude of this year to my friends and family in everyday conversation, my emotions win out, and I trail off. So why not put all of the events in a nice easy-to-consume list, in chronological order for those of you who have not yet broken the barriers of time.